Last week I participated in the Murph, a Memorial Day tradition. People at my CrossFit box all gather to remember and honor those who have died in action saving and […]

Last week I participated in the Murph, a Memorial Day tradition. People at my CrossFit box all gather to remember and honor those who have died in action saving and preserving our country. 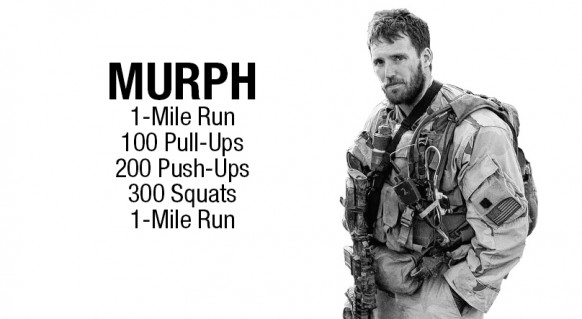 It honors a fallen hero named Michael Murphy. You can read about his story here.

Last year I was out of town on Memorial Day and ended up doing this workout a week later with a friend who was loving enough to go suffer with me. This year I was in town and able to do this workout with many of my friends at CrossFit Combustion. The box was packed and we pushed ourselves further and harder than we usually do. Why? Because this workout means more to us. When we suffer during this workout, we become more and more aware that our workout struggle pales in comparison to what our men and women in the Armed Forces do on a daily basis. I’m so thankful for people who gave everything for my life and I loathe the way I take that for granted daily.

Last year I didn’t wear a #20 LBS vest and finished about a minute quicker than this year.  This year I wore my vest and finished in 70 minutes and 50 seconds. I felt great about that. I also fear that I repeated a round along the way because I think I forgot to count one round on the segments I was doing. Oh well! It happens. One of the guys said to just take a round off, but I couldn’t do it… what if I was wrong? I refuse to shorten my work. I’d rather do more and finish later, then to finish earlier having cheated maybe. So, for better or worse, I did the work and completed it. Maybe next year I can finish in under and hour.

The coolest part of the whole thing happens when you are running. It’s the only time during the workout where you can interact with people. Granted, halfway through the workout I did stop and walk around the box to encourage everyone but most people don’t take a long break like that. haha! Anyways… during the run, people are high fiving, others are cheering, and those who came to simply encourage people would run with you and shout encouraging words. It’s really cool and exactly what each person needs as they are pushing harder and harder to finish. This is one of the things that I love about CrossFit… everyone is in it together, even when things really suck. Now, don’t get me wrong… each one of those jokers are competitive as all get out! We have plenty of people that want to win every WOD and who check the leaderboard daily, but… at the end of the day, each one of them wants the person next to them to succeed… to be better… to push harder… to hit their goals. It’s this crazy mix, but it’s also incredible.

This year I was given a button to wear on my vest that represents the 22 veterans who commit suicide daily in our country. That’s a terrible number and we MUST do a better job taking care of those who have taken care of us. Thinking about that number changed the way I thought about and participated in this years WOD.